Theresa May appears to have set a new record since she began what passes for her General Election campaign: the most empty factories visited by a party leader.

Mrs May has appeared in a bizarre string of photo opportunities – in factories where nobody else but the management appears to be around. Like this one:

On the rare occasions any employees are allowed anywhere near, they are strictly gagged by management: 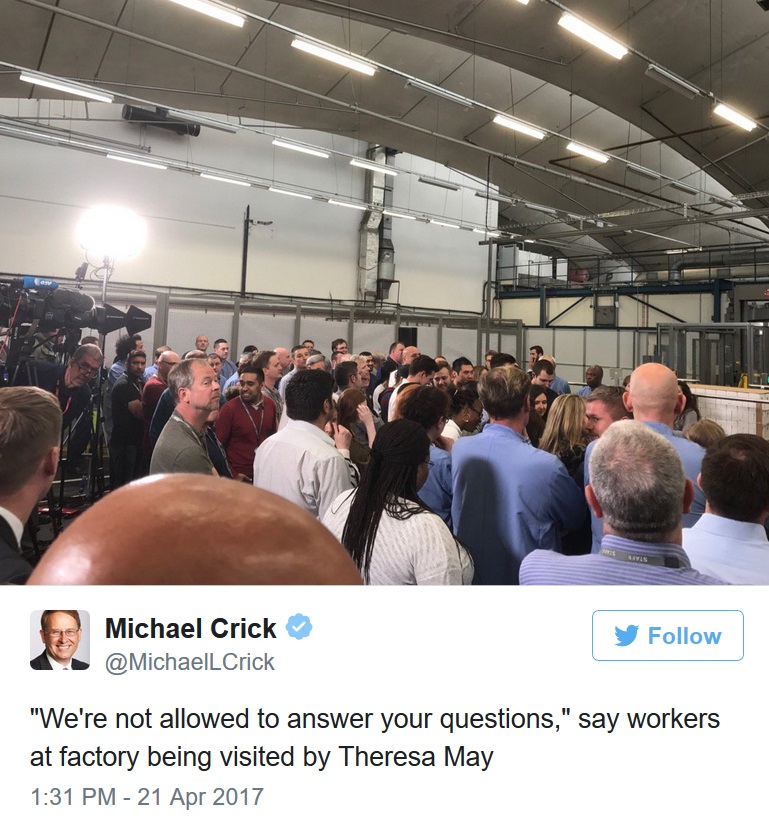 Or, if her image team decide there really have to be some – yuk – people in the frame, she waits until the employees are safely out of the way and then drags a few ‘party faithful’ in: 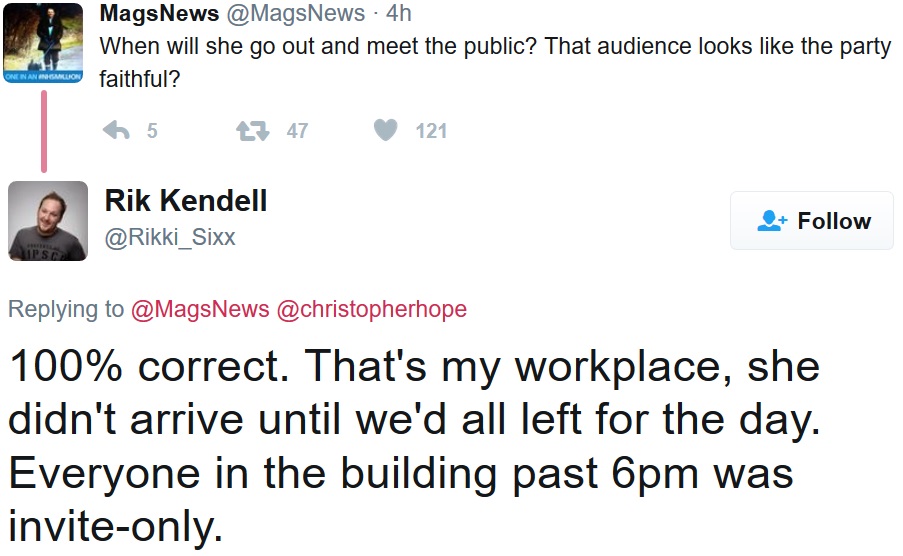 The contrast with Jeremy Corbyn’s ease among the actual public grows starker every day – yet May asks us to believe she’s the ‘strong and stable’ one fit to negotiate with hard-nosed EU leaders and their teams.

The SKWAWKBOX is provided…

I have voted for Labour all my life. (Loyalty)

In 2015 when I was canvassed I surprised myself , and the poor labour foot soldier, by the vehemence of my proclamation that this was the last time they could take my vote for granted. I was tired of voting with a peg on my nose.  I rattled off a litany of complaints about the lacklustre, timid, campaigns of recent times.  We were living under the most toxic government of my lifetime but seemed cognitively captured by the language of “austerity” and “difficult choices”.  Rather than leading and shaping opinion we were assuming we had to constantly echo the language of the Tories by constantly referencing “hard working” . To me this carries with it the implication that we were overrun with lazy and feckless scroungers as so many natural Labour voters are villifed  by the Tory party.  Workers versus shirkers…

Some Labour members are promoting the idea of electoral pacts on social media – parties agreeing not to stand against each other in order to increase the chances of preventing a Tory majority.

Whatever your feelings on the matter, keep them to yourself. Let the parties’ leadership discuss if they choose, but do not promote the idea.

The SKWAWKBOX has it from an impeccable source that right-wingers in Labour HQ have already put people onto logging details of those who do, with a view to justifying suspensions – or even expulsions – of pro-Corbyn members in the event of future leadership challenge.

Don’t play into their hands – and if you have tweeted or Facebooked anything on the subject, remove it.

The SKWAWKBOX is provided free of charge but depends on the generosity of its readers to be viable. If you found this information helpful and can afford to, please…

It could be you

Next time you hear about the Salvation Army and think about religion, marching bands and small bags and envelopes through your door, spare a thought for what they actually do. As some followers of this blog will be aware, I have had a torrid time over the last couple of years and this has had an awful effect on my mental health. It recently reached the point where my partner reached the point where she couldn’t cope with it any longer and gave me the ultimatum. “Sort yourself out, get a job or get out!” I won’t criticise her too heavily for her decision. The strain that my condition has put on our relationship has been unbearable for us both and neither of us seemed truly happy.

With no money, quite the inverse in the form of a maxed out overdraft because I’ve still been paying the bills while not…

Will Mainstream Media Barons drum home this message from that #unt?
Yes they will!

Jeremy Hunt gave an astonishing interview this morning on ITV’s Good Morning Britain. Astonishing in its content, its hubris, its complete lack of self-awareness – and its complete contempt for the British people.

Talking about Brexit, Hunt said – with a straight face:

If we get a bad outcome, it will be terrible for the British economy. We won’t be able to lock in our recovery, there will be less money for the NHS – all of our public services.

Jeremy Hunt is not famous for his brains. So perhaps he thinks that everyone in the UK has the memory and mental capacity of a goldfish – and has forgotten this:

And the unseemly, desperate backtracking on the promise, which began the very next morning after the referendum result, such as this from Tory Chris Grayling:

In other words, Hunt thinks we’re all mugs, or at least that…

Labour’s newly-announced pledge to remove the NHS pay cap and reinstate the bursary for nursing students is that rarest of things – a promise from a party leader who can be trusted and that’s exactly in line with his principles.

It’s also a desperately needed lifeline for hard-pressed health staff who have spent the last seven years desperately trying to prevent the NHS collapsing while the Tories hacked the ground from beneath their feet and thanked them by reducing their real-terms pay-packets with a derisory 1% pay rise if they were lucky.

Of course, Tories and their predictable media glove puppets are immediately pouring water on the promise and asking how it’s going to be paid for – taking us all for fools.

A poll by ITV’s This Morning asked viewers which party leader they would prefer to see as Prime Minister. The result was remarkable:

Over 165,000 people participated – and more than two-thirds chose Corbyn. Theresa May’s share of the vote was far less than a third of what Corbyn achieved.

Naysayers will say that the poll was not ‘scientific’. That’s true. But then, the methodology of official polls is rarely disclosed properly and vastly differing results suggest that those may not be too scientific either. It’s also possible, of course, that Corbyn supporters are simply more motivated to call or go online to cast their vote and influence the result – but again, that’s hardly a negative.

One thing that is certain, however, is that the result in no way supports or aligns with the prevailing punditry that claims the result of the General Election is a foregone conclusion or…

SidLabour
Create a free website or blog at WordPress.com.